Sherm was a gentle guy. The picture of him with the children in Italy captures that. 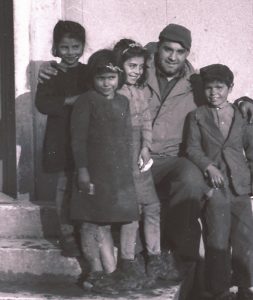 I remember how he used to show Mike and me how to do lots of things. The photography skills he learned during WWII he tried to pass on to us as we tinkered in the little darkroom he put together in a small room in the cellar with a homemade print box and his enlarger. We would cut heads off of one picture and put them on another. Waiting a few seconds for the image to burn into the photo paper, waiting for the developer to transform the white paper into an image was always thrilling. The smell of the chemicals hasn’t changed as I learned when I took a photography class a couple of years ago. The smells brought back many memories in the little darkroom.

I remember days on the back porch where Sherm did some carpentry. I remember helping him when he as building a rocking horse. I thought watching him drawing the patterns on the wood, cutting with hand saws, and drilling with the brace and bit was like watching an artist at work. The smell of wood and sawdust always brings back great memories. Finally attached the big black spring to the back and I got to try it out.

I remember hours of running bases on the old driveway. Mike and Sherm trying to get John and me out, Mike and me trying to catch John and Sherm. Doubles was always a challenge.

I loved going to the Polish home on Thursday evenings watching him bowl for Bommersbach Insurance (our grandfather, Peter P. was the sponsor). Connie Wolzazk, Dom Padula, Ed Gower, and Uncle Pete were quite a team. The smell of the beer, the joy of the beer frame, the good natured kidding (at least most of the time) made it lots of fun. I even got to keep score many times. They were pretty trusting of a little kid. Once in a while Sherm would get hot and roll 220 of so. Sometimes he would have one of his ‘drooling spells’ and his face would contort. I watched this in fear. But Uncle Pete and Ziggy would help him get his bearings back and all would be OK. I had to promise not to tell Ma what happened.

Years later when I was working at the prison and came home stinking drunk after playing golf with the director of the school, Charlie Winch, I reached the porch and threw up over the railing. Ma was giving me the old “What’s the matter with you?” Are You OK? After the scolding, Sherm calls out from his bed room, “At least he had a good time!” That was funny!

I remember writing on a yellow sticky note pad things Ma was saying on her journey. I am going backward to forward in time.
I found the sticky notes while changing purses.
Ma said” Hi Ciac.”. “Oh how beautiful.: No, I’m not ready yet…” “ OK “ Ma’s journey I believe was at least 5 days.

I remember talking to Ma and saying everything I wanted to tell her and holding her hand. I asked her to squeeze my hand if she heard me and she squeezed my hand.
Ma had a beautiful passing , as fitting as she had a beautiful life here on earth , along with hardships and as Ma would say, “Crosses to bear”..

It is 38 years ago today 2/7/2010 that our dad, Sherm, died.
I remember him as always smiling and never complaining. The “mailman”. I remember these things
Making a rosary out of chestnuts from the tree across the street(and cutting my finger as I was peeling the chestnuts} I have the scar to prove it.
Sherm walking down Perrine St with Laurie S. hand in hand.
Sherm doing crossword puzzles from the post standard newspaper and winning $25.00
Teaching me to drive, parallel park and driving him to Reese’s for ice cream in the ford galaxy convertible.
Watching football games from the car at East High stadium.
Sitting in his leather recliner showing his grandson, Michael his pocket watch.
Dancing on New Year’s Eve with Ma and wearing a party hat.
His eye glass case in his shirt pocket.
Lying on the couch watching Gunsmoke .
BONANZA
Hiding bread under his shirt and getting caught by Ma.
Many many trips to the Veteran’s administration in Syracuse NY over the span of 8 years.
The WARD.
Trying to look older so I could visit Sherm in his room. Had to be 15 years of age. I was thrown out of his room more than once by the nurses..
The straight jacket he mastered.
The bells tolling across from the VA hospital.
Driving to see him with Mike Gillings.
The room at Mercy Hospital in 1972,sleeping on the cold floor many nights..
Ma putting his beige transistor radio next to his ear with the song “Spanish Eyes”.A tear from his right eye..
4:58am on that snowy morning.. Miss you to this day..

Elusia’s husband Mike, my father, alias Sherm, Carbarn, Tank, Big Mike. Ma and Sherm went to high school together at East High the school for the hoypaloi or East End people who lived in Auburn and who were better than everyone else in town because they lived on the other side of the railroad tracks that bisect the town, at least in their own minds anyway. You know what is really funny, that mindset still pervades the children and children of children who perpetuated the uppity philosophy way back in the early 1900’s. At any rate, they met in high school and fell in love as Sherm was the “athlete extraordinary” of his time. We were all supposed to follow in his footsteps as his children and do something noteworthy with our high school careers.

I don’t have many early memories of Sherm except for one time we played catch in the backyard in silence, just tossing the ball back and forth. He was using that old piece of leather first baseman’s glove that he used in high school, and I was using my little Bargain Center glove. We were over on the driveway on the west side of the old pear tree. The other memory was one day when I walked his mail route with him, (he worked for the United States Postal Service) and I remember telling him something like I thought he was a piece of garbage and a nothing and a loser, at least that is what it amounted to. I guess that is a conversation all children probably have with their parents at one time or another, or maybe I was just giving back to him all the negativity and character assassinations that his fucking brothers gave to me even when I was a little boy. God what a bunch of fucking assholes they were. I never forgot those things and I never told him what they said to me because even as a little kid I knew he was dealing with more than any man could handle. What right did they have? I was just a little fucking kid and didn’t do anything to them or anybody else. Some things stay with you for a very long time.

The other memories were of Sherm and Ma dancing around the house on New Year’s Eves, and of him being ill and in his bed in the little room off the tv room and in hospitals trying to deal with all his sicknesses, primarily complications from a non-malignant brain tumor that had to be removed via cobalt injections delivered directly into its mass through holes in his skull. We lived at the Veterans Hospital in Syracuse for what seemed to me to be an eternity.

OH well, enough of this. It’s over and done with. Or is it? I guess bits and pieces of everything hang on to us for a very, very long time. Maybe they need an outlet, not just for us, but for the souls and spirits that have carried them along on whatever journey they are now on. John L.